Today I received my Harper bear from Molly Bears. Molly Bears was started by a family that lost their little girl in the same way we did - a cord accident. They make bears for parents who have lost a child to miscarriage/stillbirth/infant death. The bears are weighted, so Harper bear weighs 3lbs 14oz, just like my Harper did. 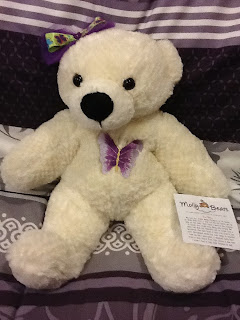 The waiting list for a Molly Bear is very long, as is the wait time (currently 16-20 MONTHS). I was able to get my bear in just over 3 months by making a donation that bumped me up the list. When you order a bear, you are able to share any details you would like represented in the bear - I specified purple and butterflies. I am so so grateful to Ms. Susan, who made my bear, and sent a sweet note with her. It is so comforting to have something to hold that weighs what my Harper weighed (When I took her out of the box, I thought she seemed too heavy, but I took her upstairs and put her on Joey's baby scale, and she weighed exactly what she should).

I am definitely in a season of waiting. Waiting for the bear, waiting for the weighted heart that we requested from another organization, waiting for a keychain for Steve, wondering if we will ever receive any more pictures of Harper other than the 8 that we have, and waiting for God to tell us what is next. We are 100% sure that He has promised us more children that live with us here on Earth, but we are not sure about the when or the how. We are praying that we will have an answer to that question soon, but until then, we wait.

Waiting has never been one of the things that I am good at. I want to know everything yesterday. I want to have a plan. If I could just know when and how things will happen, I would be OK with the waiting for it to happen. But that is not how God works.

Because of the Lord's great love we are not consumed, for his compassions never fail. They are new every morning; great is your faithfulness. I say to myself, "The Lord is my portion; therefore I will wait for him." The Lord is good to those whose hope is in him, to the one who seeks him; it is good to wait quietly for the salvation of the Lord. Lamentations 3:22-26

On another note, I did not finish the capture your grief project. It was really stressing me out, trying to figure out what to take a picture of for every day, and I know that was not the purpose of it, so I stopped. Maybe I will try again next year. I was, however, deeply saddened to learn that the Facebook event page for the project was deleted because people reported a picture of an angel baby. Is it hard to look at pictures of dead babies? Yes, but that doesn't mean people don't have the right to share those pictures. Sometimes I look at them, and sometimes, it just hurts too much. I commend any parent that is brave enough to share their pictures with the world. I am just not that brave.
Posted by Unknown at 7:01 PM 1 comment: